The conventional view of terrorists is that they are focussed on political or economic gains. So a common strategy to prevent terrorism is to provide people with non-violent ways of achieving those goals. But Max Abrahms of Stanford has studied terrorist groups, and he concludes their motivation is not political gain.

Abrahms has an alternative model to explain all this: People turn to terrorism for social solidarity. He theorizes that people join terrorist organizations worldwide in order to be part of a community, much like the reason inner-city youths join gangs in the United States.

50 Reasons to Date a Geek

Just let me cling to my illusions, OK?

Why would Republicans, the party of business, want to focus our country on breathing life into a 19th-century technology — fossil fuels — rather than giving birth to a 21st-century technology — renewable energy? As I have argued before, it reminds me of someone who, on the eve of the I.T. revolution — on the eve of PCs and the Internet — is pounding the table for America to make more I.B.M. typewriters and carbon paper. “Typewriters, baby, typewriters.”

Of course, we’re going to need oil for many years, but instead of exalting that — with “drill, baby, drill” — why not throw all our energy into innovating a whole new industry of clean power with the mantra “invent, baby, invent?” That is what a party committed to “change” would really be doing.

Prime Minister Stephen Harper just called a federal election for October 14. So Canadians will have to endure a 5 week long political campaign. Compare that to the seemingly endless campaign cycle in the US.

On the other hand, this is also the 3rd Canadian election in 4 years. Canada has been struggling with minority govermments since the Liberal party collapse in 2004.

What’s the matter with Canada?

Canada’s political system is in turmoil. […] Canada is quietly becoming a political basket case, and this latest election may make things even worse.

Clive Thompson has written a very interesting piece for the NYT magazine about how social networking has changed people’s relationships to friends and acquaintances: I’m So Totally, Digitally Close to You.

There’s a lot of good stuff in this article – Thompson actually makes the best case for micro-blogging services like Twitter that I’ve ever seen.

Each little update — each individual bit of social information — is insignificant on its own, even supremely mundane. But taken together, over time, the little snippets coalesce into a surprisingly sophisticated portrait of your friends’ and family members’ lives, like thousands of dots making a pointillist painting.

The article says that even with all this technology, people still can only really keep track of so many close friends – our “Dunbar number”. Social network users say that their relationships to those close friends have become deeper and richer as a result of these tools. And they’ve also greatly really increased the number of “weak ties” to loose acquaintances that they can call on from time to time.

The flip side of the coin is that most kids these days have no choice but to participate in social networks. They’re living in the equivalent of a small town, where everyone is talking about everyone else. If you don’t make a regular appearance, and try to express yourself, others will define you against your will.

Of course, people often act far worse online than they would ever behave in person. We see that in email discussions and message boards. That additional degree of separation allows people to act without considering the consequences. And when those actions are broadcast for all to read, it can really be destructive. Just imagine if people behaved in person like they do on Facebook.

A friend was watching the Republican Convention:

Me: “You thinking of changing sides?”

“No, but I am still amazed at her delivery.”

Me: “No wonder. She’s had lots of practice with deliveries.”

Thank you, I’ll be here all week…

The Washington Post reviews Disney’s Tomorrowland in Anaheim: The Future Is So Yesterday.
They’ve updated a bit since it opened in 1955. But some things are reassuringly retro.

What’s interesting about Tomorrowland’s newest future is its focus on what doesn’t change. This Dream Home future at 360 Tomorrowland Way in Disney’s original California park is intentionally reassuring. The cast evokes a multigenerational intact nuclear family, the Eliases, which includes one daughter (“Princess”) and two sons and two vigorous grandparents who live so close as to routinely drop by. This future has the sound of crickets outside the front door, and a light breeze forever blowing through its flowering vines. This future, in Dad’s room, has Lionel trains.

Of course, the future in this house-of-the-future has plenty of whiz-bang gizmos, but most of them are already on the market. If you want a drink of water, the kitchen sink is a kick. It is controlled by a joystick. Hit the trigger button on top, and — vooop– a curved chrome spout slides up and forward like a snake from where it has been hiding in its cabinet. […] Arguably the most futuristic item is the mock-up of an affordable “fab lab.” It effectively is a printer — industrial versions of which exist — that takes objects you design on the computer and manufactures them in three dimensions. Since one of the Home’s sponsors is Microsoft, we also know the future has Windows crashes. “Photo Browser 2 has stopped working. Windows can check online for a solution to the problem,” proclaims the study’s screen-topped table during a recent visit.

It’s nostalgic and a bit sad to look now at theme park visions of the future. But Danny Hillis, computer pioneer, former Disney fellow, and Long Now founder, thinks Disney is giving people what they need with this retro view.

“It was very surprising to me, getting to the future, that nobody was all that interested. Things just started to happen so fast, we were overwhelmed. With the microchip, we stopped being able to imagine the future — we had so much trouble handling what was being brought out in the present.

“The second thing, everyone was imagining the future was about universal prosperity — kids being much better off materially than they were. To see that attitude today, you have to go to China and India. They are very future-oriented. The Chinese are sort of the way we were in the ’60s. Everything’s going to get better. There will be glitches, but we’ll overcome them by progress and effort.

“We are future overwhelmed. I don’t think people try to imagine the year 2050 the way we imagined 2001 in 1960. Because they can’t imagine it. Because technology is happening so fast, we can’t extrapolate. And if they do, it’s not a very positive thing to imagine. It’s about a lot of the unwanted side effects catching up to us — like global ecological disaster. […]

“What I think it says is that we are nostalgic for a time when we believed in the future. People miss the future. There’s a yearning for it. Disney does know what people want. People want to feel some connectedness to the future. The way Disney delivers that is to reach back in time a little bit to the past when they did feel connected.

“It’s a core ache. Something is missing that we’re searching for.”

An article in Popular Mechanics estimates the cost of the upcoming transition to digital TV in the US: Digital Television Transition Funding – Do Americans Have a Right to TV?

The federal government is spending about $1.5 billion of taxpayer’s money on education and incentives.  Is this really how we want to be spending money from the sale of public spectrum?

A discourse on Real Programmers by the folks at xkcd. 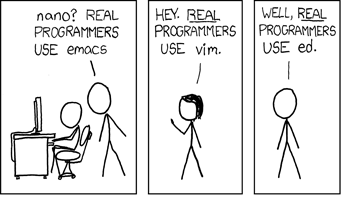 Sigh. I must be getting old.

I don’t pay much attention to fashion or women’s magazines. There’s only so many articles on the lives of celebrities or new fad diets that I can take. And it bothers me that most of these magazines project an image of unattainable female perfection to so many women (and young girls).

Of course, we all know that a lot of photos in those magazines are extensively doctored. But most of my girl friends would not have noticed anything unusual about the July 2007 Redbook cover. (Other than noting that Faith Hill looks pretty good for a 39 year old mother of three.)

Well, the Jezebel gossip site got hold of the original photos of Faith before Photoshop, and put them together in a “before and after” animation: Redbook Shatters Our Faith.

It’s like one of those “spot the differences” games in the newspaper. When you flip back and forth between them, the effect is uncanny and pretty frightening. Not only did Redbook clean up her crow’s feet, but they actually changed the shape of her back and arms. Her arm after modification looks like it belongs on a space alien. Or a n anorexic super-model.

For a list of what changed, see the numerically-annotated version of the photo.