I was sorry to hear that the actress Barbara Bel Geddes died on August 8 in Maine. She was best known to modern audiences for playing “Miss Ellie” on Dallas from 1978 to 1990.

But I will always remember her for her role as Jimmy Stewart’s long-suffering girl friend “Midge” in the Hitchcock movie Vertigo. 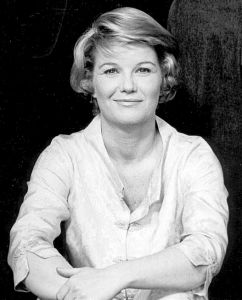 I was always kind of soft on Barbara. Sure, Kim Novak was stunning in her roles. And Stewart did some of his best work as “Scotty”. But you really had to feel something for Barbara’s character, whose unrequited love for Scotty turns to despair as he descends into his obsession.

Besides, I always had a thing for Velma too.